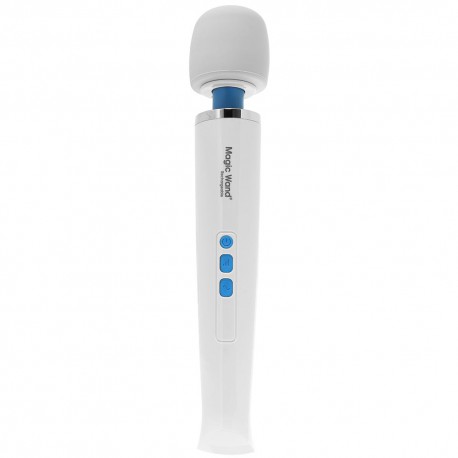 When the original Hitachi magic wand came out, it became an instant hit amongst everyone. Women of all age groups started using it and it became a crowd favorite. As a matter of fact, this massager was bought by people of various ages to massage their body parts as well. The vibrations, the hand help control, and other factors just had this product the most well-built sex toy ever.

However, this too had its own set of issues. The primary one is the presence of that nasty long electrical cord that puts in a lot of restrictions. The six-feet long cord meant the user had to be near an electrical source like a wall socket or use some sort of extension device. This also meant a lot of restrictions when you’re making love as a couple. Imagine how tedious it would be not to get tangled up in electrical cords while you’re busy making love. Furthermore, this could also be a valid health hazard.

What other features does the magic Hitachi wand wireless have over the original version?

Being cordless is in itself an investable upgrade. However, if you want more points, here are they:

4.5
Latrell S.
Yeeesssir! This will rub you the right way!
Over a year on this one and going strong. Do yourself a favor and get the speed control switch with the knob to route this through. It gives you a ton more control over intensity.

4
Ameer S.
The last one lasted almost 8 years...
and the old one still works, just sounding a little louder than it did new. Stop reading reviews and buy the thing. It's a worthwhile investment. Get one of those dimmer extension cords made for lamps. It'll let you control the strength of the vibrations a lot more finely.

5
Anonymous
Really good
My wife and i really enjoyed this

5
Chandler S.
Just wow!!
Every woman should have a wand!!

5
Bethany D.
not for the faint of heart
This thing is POWERFUL, like wow. I just got done using it for the first time and lemme just say it s not for beginners

5
Jarrett T.
Woooow!
We have a variety of different sands but wow! This thing is a beast! Didn't even get it off the first setting before she was done!

5
Trevon C.
OMG
This is the greatest sex toy ever created! I used it alone and with my husband and it s amazeballs! The first time we used it was almost right after it was delivered and we were fully clothes and it still worked! We can t wait to try all the vaginal and penis attachments that are available!

5
Noel L.
All of the Yes
This was an amazing product that sure did pack a punch. I've had other similar products in the past but none worked as well as this one.

5
Kobe L.
Worth the praise
The fact that it's rechargeable alone is enough to buy it. This thing is a beast! Fantastic to use with a partner as well.

5
Anonymous
You need this!!
I've been years on the fence about this toy. I don't know what I was waiting for, this definitely lives up to the reputation! It's now my new favorite and my new go to. The large head surface hits ALL the right spots, no moving it around trying to find that sweet spot to send you over the edge. It's great solo play or to use with a partner. I highly recommend.

5
Skye D.
Worth every penny
I never Owned another, so I can t compare. All I can say is, I didn t know what a multiple orgasm was until I got this wand. I have had it for over a year and am still learning new tricks, I can never again live without it. It reaches deep inside and allows me to have A spot orgasms, G spot orgasms, clitoral orgasms, and sometimes a combination of two of those at once. I never knew I was capable of such orgasms, All my life I had only ever had clitoral ones. Needless to say, extreme satisfied :)

5
Anonymous
Worth the hype
The different vibration settings really make a difference. Charge lasts a long time like 4 hours and counting since I fully charged it. I had the plug in one before and this is worth the extra money.

5
Anonymous
DONT THINK. JUST BUY IT
I have gone through three different vibrators in the past six months. After the mind blowing, efficient, and surprisingly tender orgasm this thing gave me I now believe in whatever god there may be up above. If I could speak to them I would say: "thank you for putting me through the pain of three incredible losses... I understand now." Don't think and just buy it. Don't skimp out on the $50 if you can afford to get this cordless one. If I had bought this wand first instead of trying to find a substitute in those three (now dead) vibrators, I would've actually saved money and a whole lot of frustration. Do it. Trust me. If I could give this 10 stars I would. I just hope it lasts forever like others have said!

5
Anonymous
Great
Wife absolutely loves this. Best one yet

5
Jaelynn P.
Wand
This toy is absolutely unbelievable. Definitely do not regret buying this!

5
Armani B.
the best of the hitachis
I've owned both the original and the rechargeable at this point. Not only does it have more speeds (and vibration patterns) to experiment with than the original, but it also features a smooth silicone head. The original certainly has its place, but an upside to the rechargeable is that you don't have to worry about accidentally unplugging it from the wall in the middle of play. I just make a weekly ritual of charging all my toys so I never have to worry about the battery dying mid-session.

5
Anonymous
Wow!
Worth every penny! I wish I would have got it sooner.

5
Jerome F.
THE BIGGEST O EVER

5
Cali M.
Wow
So strong and versatile. Great for solo (male or female) or couple. So many attachment options

5
Ashtyn M.
mind-blowing!
I have only great things to say about this wand. I love that it's cordless, and the actually vibrating part is very soft and squishy, preventing my hooha from getting irritated/overstimulated. Would definitely recommend.

5
Anonymous
Fantastic alone or together
Not surprising, this is a fantastic toy, and the wireless feature makes it even more fantastic over the wired version. Wish there was a travel lock though. Great used solo, or used together while riding the cowboy/etc

5
Bridgette G.
Perfection
What can I say that hasn t been said about this wand? 100% superior to other wands and well-worth the price for all genders! The attachments are also magnificent, using this wand with the sleeve attachment as a masturbator or on your partner with lube is something you won t regret.

5
Anonymous
Lives up to the hype
I have an original Hitachi Magic Wand and loved it. Thought I lost my original and decided to get the latest and greatest. This is great, being cordless and rechargeable. The option for different vibe patterns is great too! Anything from the Magic Wand family is a staple of any toy collection inmo

5
Gavyn G.
Best, Most Intense Orgasm She's Ever Had
So, started with a back massage after we opened it up to show her how intense it could be. We incorporated into a little play later, and while it was intense at first, she found her setting. Later, she orgasmed like I've never heard before in over 14 years of marriage. Wish we found this years ago!

5
Paxton I.
Magic Wand
Very powerful nice wide head for a good full area shake. Does the job very well is a little noisy. This is expected with this much power. Definitely a must add to any toy collection.

5
Kacey W.
The Rumors Are True
Theres a reason this is a classic! Oof this toy really packs a punch. Multiple speeds and patterns are super fun! I especially love that you can use it with or without the cord.

Please, login to leave a review