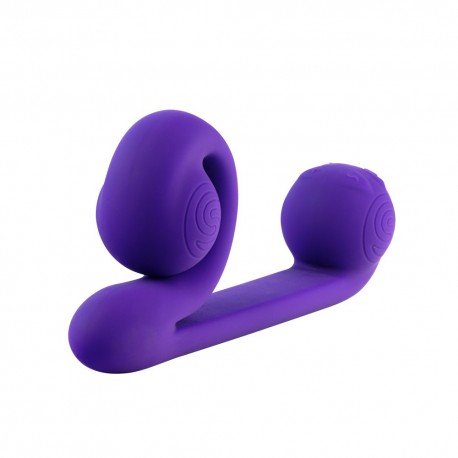 Snail vibe is a toy that looks like nothing you've ever seen. One glimpse at it and you'd have no idea that this could be one of the best sex toys out there.

But what is it that makes the snail vibe such a great product?

Just by the looks of this product, you can guess that it is hiding innumerable features up its sleeve. Here are a few important ones:

Most vibrators come with only a single type of vibration using one motor. This is not only boring but can also reduce efficiency. The snail vibe comes with two very powerful motors that have the capability of producing sustained vibrations on two different parts of the body.

Even in its loudest setting, the snail vibe toy will produce a sound of less than 45dB. So feel free to go wild in the privacy of your bedroom even if you've thin walls with nosey flatmates.

You'd be surprised to know that with all the combinations of patterns, intensities, and speeds, the snail vibe would give you a buffet of over 300 incredibly satisfying modes. So now you will never run out of options or get bored of the same sort.

Feel like taking your adventure into the bathtub? Go for it. With its waterproof body, you don't have to worry about liquid damage anymore. This also means that the toy is easier to clean. Just wash it off with mild soap after use and you're good to go.

With its superfast rechargeable batteries, you don't have to hunt for batteries every week. Just plug it in for a few hours and you'll get a juiced-up toy every time.

With so many amazing features it was only a matter of time till this sex toy became the women's best friend and it truly did. Being one of the top-selling products on any sex store you should definitely give this a shot.

Only users who already bought the product can add review.